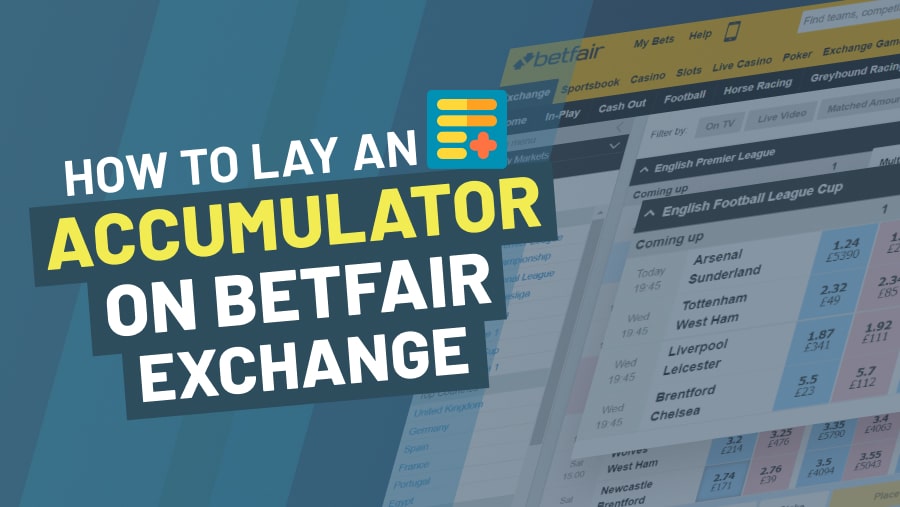 When you lay a bet at the Betfair Exchange, you’re betting against an outcome. By utilizing this bet-type on football markets, bettors have two outcomes supporting their bet – draws and losses.

This is in contrast to the standard Win-Only market found on sportsbooks, where you may only bet on the overall winner of a particular event.

The Betfair Exchange offers a vast market boasting a variety of the most popular sporting action from all over the world. However, bettors cannot make accumulators on the Exchange as of yet.

This means that it’s not currently possible to lay an accumulator on Betfair. That said, there are methods that bettors can use via the Exchange to improve accumulators wagered on Betfair’s Sportsbook.

Read on to find out how to lay off accumulator bets at the Betfair Exchange.

How To Lay An Accumulator On Betfair – Hedged Bets

Unless the Betfair Exchange offers pre-set Special Accumulators during the weekend, placing accas on the site simply isn’t allowed. When you try to view Multiples on the Betfair Exchange, the site promptly alerts you to the fact that the sportsbook is the only place to set up these types of bets.

That’s where the lay bet on the Betfair Exchange comes in. See an example of how to lay multiples on Betfair and protect against potential losses (or even make a profit) below:

How To Lay A Multiple On Betfair

Let’s say you’ve placed an accumulator on Betfair’s Sportsbook with four teams all to win in the Premier League. The odds upon confirming the wager stood at 20/1, with £200 in profit on the table if each side comes out on top in their games.

West Ham and Chelsea are both 1-0 up. On the Betfair Exchange, the two London clubs trade for 1.4. In this instance, you decide to lay both teams for £10 each with your liability at £8 overall.

With the current odds and Betfair’s standard market rate commission at 5%, you’d make £9.50 profit per game if both sides concede an equalizer or lose.

Chelsea are hit by a red card and end up losing while West Ham concede in the dying embers of the affair. Thus, your accumulator is ruined. However, with both Chelsea and West Ham failing to see out their victories, you’ve won £19 through the pair of lay bets.

Considering your stake on the accumulator was £10 and you’ve now won £19 on the Exchange, that adds up to a profit of £9.

How To Lay a Treble On Betfair

Trebles on Betfair come under the same umbrella as Multiples. Therefore, bettors can’t place them on the Betfair Exchange.

You can, however, utilize the method outlined above to hedge your bets and protect against losses from trebles. It’s not just trebles that can be hedged against either, because how to lay a double on Betfair works in exactly the same way.

For example, imagine that you placed a double on the Betfair Sportsbook. In this bet, you’ve wagered on Liverpool and Tottenham to win their respective fixtures.

If you feel that one or both teams will fall short of your expectations, you can head to the Betfair Exchange and attempt to cut your losses or even earn a profit by placing a lay bet on either side.

It should be noted that from time to time, Betfair may upload Special Multiples to the Exchange. Such multiples cannot be personalized by bettors and must be wagered as they are.

I’m a freelance writer who loves all things sports & betting related. Having worked in this field since 2018, I’ve experienced a wide range of intriguing bookmakers and online casinos. With this expertise, I strive to create helpful, honest articles. My primary goal is quite simple: to guide and inform readers using facts and analysis.

View all posts by Conor Rafter

8
Code: NOT APPLICABLE Bet £10 Get £30
Register and place £10 or more on your first Sports bet at odds of Evens (2.0) or greater, and get £30 in Free Bets credited to your account within 10 hours of your first bet being settled.

9
Code: NOT APPLICABLE Money Back As a Free Bet
18+ begambleaware.org. New customers only. Min deposit £10. Money back as bonus if first sports bet loses. Wagering requirements: sportsbook 3x at min. odds of 1.40 (2/5), casino 50x. Unless forfeited the sportsbook bonus must be wagered before using the casino bonus. Bonus expires 7 days after opt-in. Visit Unibet.co.uk for full T&C's