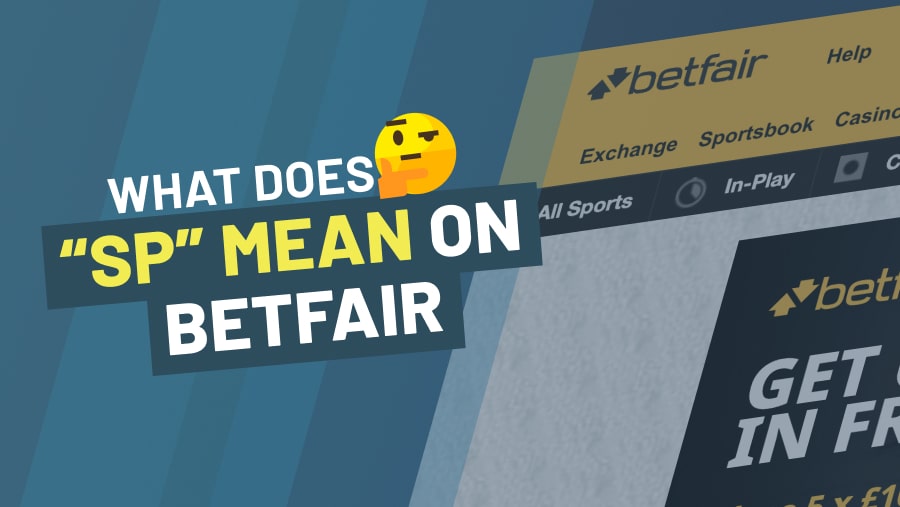 SP stands for ‘Starting Price,’ and it has traditionally been associated with traditional bookmaking. In different countries, the method for determining SPs for each runner differs. The on-course bookies have traditionally selected the Starting Price for any horse in any race. They calculate an aggregate price or odds. Their Starting Price, predictably, is geared toward making a profit.

What is Betfair starting price?

The acronym ‘SP’ stands for ‘Industry Start Price,’ which is the price a horse, team, or outcome is priced when the event begins. The SP is a weighted average of prices from various betting markets.

Meanwhile, ‘BSP’ stands for ‘Betfair Start Price,’ which refers to a horse, team, or outcome priced on the Betfair Exchange when the event begins. The BSP frequently differs from the Industry Start Price and is often higher, resulting in greater benefit to the punter.

What does take SP mean on Betfair?

When a market was suspended at the ‘off’ of the relevant event in the past, unmatched bets were immediately cancelled.

With the “keep bet” and “take SP” options, you can now choose whether your unmatched Exchange bet converts to an SP bet when the market suspends at the start of the event or if you want the bet to “persist” after the event begins. When the market suspends, use the ‘At In-Play: Take SP’ option in the bet manager to convert your unmatched Exchange bet to an SP bet.

What does SP mean on Betfair?

When the market is paused at the ‘off’ of the relevant event, Betfair calculates the Starting Price (‘SP’ or ‘Betfair SP’) by balancing all SP and Exchange bets. Once an SP bet has been placed, it cannot be cancelled.

A bet at Betfair SP is a fixed-odds bet, meaning the odds on each selection are computed, and bets are matched before the event begins. For example, suppose a minimum/maximum odds limit is requested for an SP bet.

In that case, the minimum/maximum odds can be decreased in a back bet or lengthened in the case of a lay bet at any point before the event begins. However, as previously stated, a customer cannot cancel an SP bet request after it has been placed.

What does SP mean Betfair?

The starting price, or SP as it is commonly abbreviated, refers to the odds for a horse or greyhound announced as the race begins, with no additional betting allowed. The SP permits bets to be placed when no early fixed odds are available for a particular event.

The Betfair Starting Price is an alternative to the industry’s typical SP system. It was founded in December 2007 to attract new clients and generate early liquidity in its markets. The Betfair SP is available on Betfair’s horse racing and greyhound racing markets.

For those who don’t have the time or patience to catch a market at the optimal price, Betfair promotes the SP as a convenient option to get a bet matched at a fair price. Because backers and layers generate the Betfair SP, it benefits from not including a bookmaker’s margin (there is still commission to pay, though). As a result, Betfair claims that the Betfair SP is 40% higher than the industry SP on average.

What does Betfair SP mean?

BSP or Betfair SP stands for Betfair Starting Price. It’s the total of all odds bookmakers offer before a horse race on a particular horse soon before the event starts. Betfair established it in 2007. It is a convenient betting option for horse racing lovers who either don’t have the patience or aren’t available to get to the market at the proper time.

The Betfair Starting Price is determined by Betfair layers and backers, not by high-street bookmakers looking for new ways to increase profit margins. It’s worth mentioning that the Betfair SP is roughly 40% higher than the official industry starting price.

How to find Betfair starting prices

To begin, make sure the new ‘Betfair Starting Price’ box is selected above the market view. In the market view, a new column will appear, allowing you to back at SP. You can also lay your selection at SP if the ‘Back & Lay’ box is checked.

Then, depending on whatever wager you wish to place, click on the correct box labelled “SP.” The white columns displaying the next best prices that you could previously see in the Full View will appear when you click the Market Depth box.

Betfair what is SP?

Experts and ITV Racing commentators may also bring up the Betfair SP (BSP), which is a horse’s starting price on the Betfair Exchange. However, the BSP is slightly different because it is calculated using both backing and laying bets on the race.

Betfair what does take SP mean?

When betting on a horse race, you’ll have the option of taking the current price or the SP. If you take the SP, you’re betting that the starting price will be lower than the current price. A horse, for example, is currently available at 15.0 odds.

If you utilise the Betfair exchange, the SP is slightly different. Betfair offers its own version of the SP, the BSP, instead of an independently established SP. The BSP stands for ‘Betfair Starting Price .’ It is determined using bets placed in the market by both backers and layers.

They claim that compared to the traditional system, it provides a considerably more fair starting price. Indeed, Betfair claims that the SP is often superior to the official SP supplied by several sportsbooks.

Betfair what does SP mean?

The Betfair Starting Price is a process used by Betfair, the world’s largest betting exchange, to determine a starting price. The odds are selected from the prices established by punters for both lay and back bets, and the Starting Price is calculated using Betfair horse racing SP data on the Betfair exchanges.

As a result, Betfair’s opening price is usually higher than that of fixed-odds bookmakers.