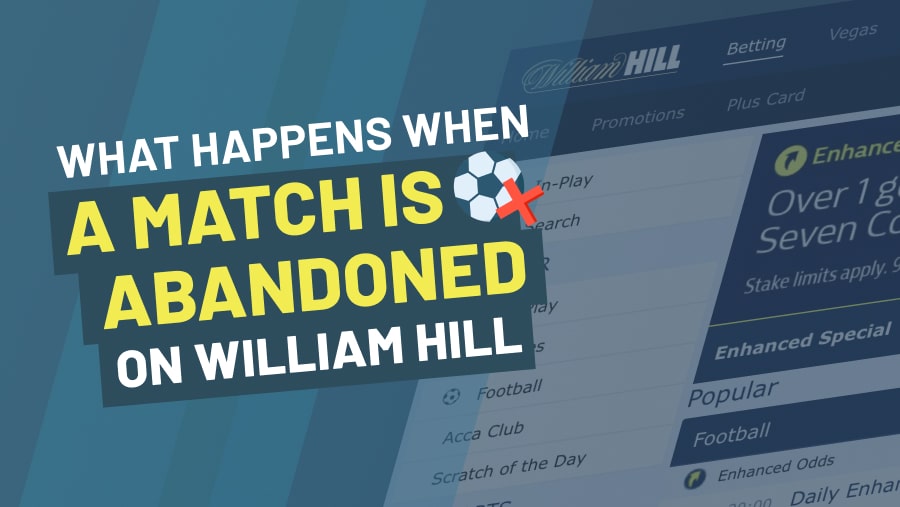 When a match is abandoned, the bettors will more often than not get all of their money returned and it’s as if they never placed the bet. Most betting options are classed as void when a game is abandoned, as the result is not possible to determine with any certainty.

However, in those instances when the result of the bet can be determined before abandonment, this is not the case.

Page Contents hide
I Matches Abandoned During Play
II What Happens If You’ve Got An Abandoned Game On Your William Hill Accumulator?
III Why Matches Get Abandoned

In some games abandoned after the start of play, certain betting outcomes will already have come to fruition. In these instances bets involving outcomes that are able to be fulfilled will stand. Any of these winning bets will be paid as usual, and losing bets won’t be refunded. Other bets, such as full time score or second half scorer, will all be refunded, no matter how well either team was playing.

Notably, all games that are able to resume on the same day are not counted as abandoned. Bets on these games will stand as normal, as all outcomes will be determined when the game restarts and ends with the final whistle.

What Happens If You’ve Got An Abandoned Game On Your William Hill Accumulator?

When one of your accumulator bets is affected by a non-starting or abandoned game, the bet for that game will be void, as above, but all other selections of the bet will run on. Therefore making your double a single, your treble a double, and so on.

If the outcome of the abandoned game was determined during play before the game was abandoned, it’s counted toward your accumulator as normal. Only when an accumulator outcome is postponed or made dubious does that leg of the acca get refunded.

As an example, imagine the following scenario:

Why Matches Get Abandoned

There are lots of reasons that a match can get postponed or abandoned.

I’ve always been partial to a flutter on any big sports event, ever since I had pocket money to spend. This sports gambling hobby made the transition into gambling and casino writing a natural one. I’ve always loved watching and playing football growing up and am an avid follower of Chelsea FC.

View all posts by William Bunker