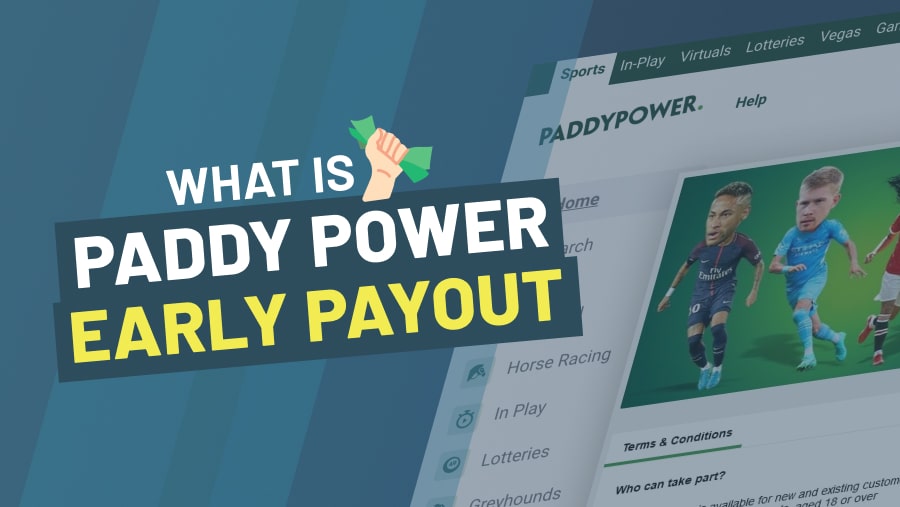 Paddy Power is one of the leading bookmakers around, with an excellent range of offers, bonuses and promotions helping to ensure it has a place at the top table.

Also known as Paddy Power 2UP, one of the top deals on offer for those who join the Irish bookie is Paddy Power Early Payout.

Paddy Power paying out early has long been a big trend for the company, which often makes headlines in the media as a result of surprising decisions to close markets early.

But the Paddy Power Early Payout offer is worth exploring in detail – so let’s do that here.

What is Early Payout on Paddy Power?

Paddy Power Early Payout or Paddy Power 2UP means customers get their bets paid out on football matches if the team they backed takes a 2-0 lead.

It does not matter if the opposition comes back to claim a draw or even get a win, the bet will be settled as soon as a team is two goals up. The score does not have to be 2-0, with 3-1 or 4-2 among the scores that would result in Paddy Power Early Payout promotion being triggered.

Paddy Power Early Payout runs for only certain competitions – let’s take a look at what leagues cover the Paddy Power 2UP offer:

So let’s say that Chelsea are playing Arsenal in a big Premier League game. The Blues then get off to a cracking start and they race into a 2-0 lead. This means anyone who bet on them to win the game will have their bet settled immediately due to the Paddy Power Early Payout offer.

Even if Arsenal fight back and claim either a draw or go on to win, those who bet on Chelsea to win the game will already be sitting pretty with their winnings paid out into their account.

A lot of bookmakers offer an early payout deal these days, with Paddy Power’s among the best.

After learning about Early Payout Paddy Power, it is important users know about the key terms and conditions that apply for this special promotion.

It is not possible to use free bets on Paddy Power Early Payout and the bet is only settled once.

So if a customer is paid out when their team goes two goals clear, this does not mean they will get another payout at the end of the game.

Users who bet on the draw will also not qualify for the Paddy Power Early Payout deal for obvious reasons, while the promotion does not run on bets with enhanced odds taken.

Paddy Power pledges that it aims to settle bets on its Paddy Power Early Payout deal within 15 minutes of a team taking a two-goal lead in a game.