Paddy Power’s sports betting promotions, bonuses and offers are among the best around.

Paddy Power Power Up is part of the suite of deals available for those who join the bookmaker.

What is Power Up on Paddy Power?

Power Ups are a type of bet boost or enhanced price that is offered to Paddy Power users.

The promotion is part of the Paddy Power Rewards Club, which is widely regarded as one of the best offers of its type at sports betting sites right now. Power Ups can be applied to bets on a wide range of sports on the Paddy Power website, such as football, tennis, cricket and golf.

Anyone who has a Paddy Power Power Up token to use can see by how much the Power Up will boost their odds before they decide whether or not to take the enhanced odds.

For example, a bet that is initially offered by the bookmaker at odds of 10/1 might be boosted to 12/1 through the use of a Power Up token that has been dished out by Paddy Power.

Anyone who put £10 on the boosted price by using the Power Up would get back a total of £130 rather than £110 at the original odds, improving their profit from the wager by a total of £20.

How does Paddy Power Power Up work?

So what do Paddy Power customers need to do to earn a Power Up token that they can use?

Power Up tokens are available as part of the Paddy Power Rewards Club, which also dishes out a free bet of up to £10 as well.

Users in the Paddy Power Rewards Club who place a qualifying bet of at least £5 will be credited with a Power Up token that they can spend the following week.

As an example, users might need to place a qualifying bet on a certain event to get a Power Up that they can then spend to get a boosted price on the next sports bet they want to place.

Examples of previous Power Up offers run by Paddy Power include tokens being given out to customers who put a live in-play bet on cricket’s Big Bash League action in Australia.

Power Up tokens are valid for seven days and there are other terms and conditions as well.

All special bonuses and offers at sports betting sites come with their own set of terms and conditions and Paddy Power Power Up tokens are no different.

Power Up tokens will expire after seven days so customers need to make sure that they use them up within a week – or they will lose them. 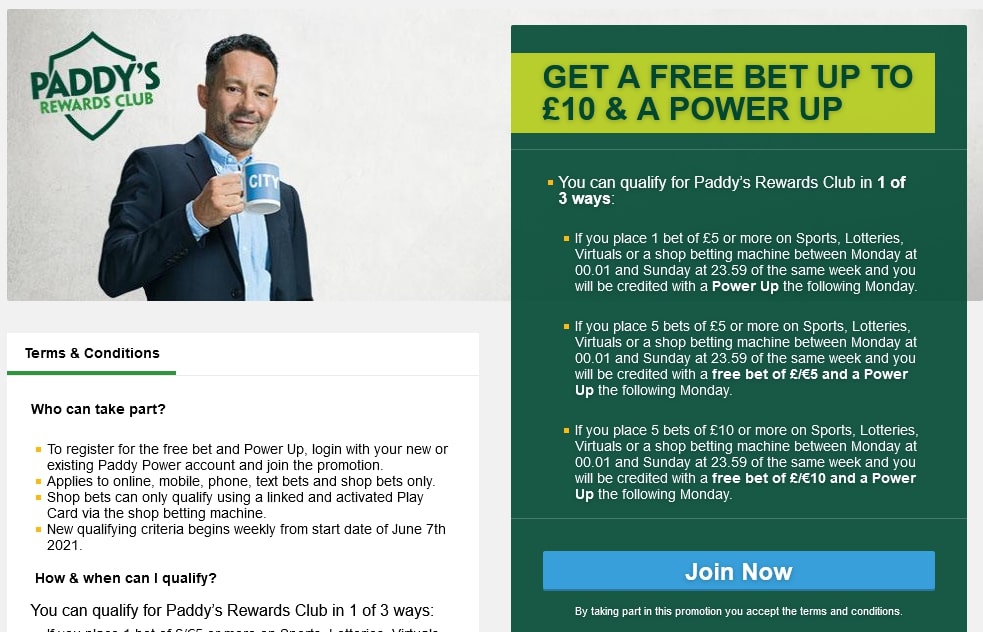 The maximum stake that can be put on a bet at Paddy Power using a Power Up token is £50. Power Up tokens at PP can also only be used on sports bets – and on to win markets.